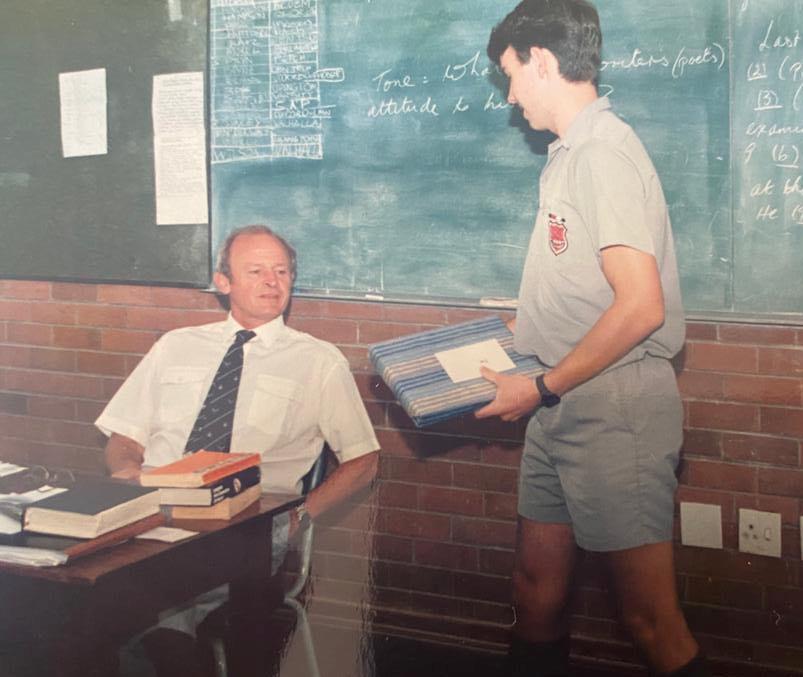 Full marks to Jan for thinking of a novel and worthwhile way to celebrate your birthday. I feel as if I’m also receiving a gift being asked to write about how you’ve influenced my life, as you have the lives of many people. It would be interesting to contemplate how many. A multiple of the number of classes you’ve taught through the years would give a reasonable initial estimate. Of course allowance would need to be made for the few who never fancied your style. All are not for winning.

My experience of interacting and communicating with 6AS classmates of 1990 and other former Maritzburg College pupils is that talk of the past usually turns quickly to teachers. This is interesting considering the emphasis that used to be placed on things like institutional history, engrained tradition and resources when the strengths of College were extolled. It is also entirely appropriate, since it was the teachers and the quality of our learning experience that enabled many of us to make something unusually good of College in the late twentieth century. But I digress. The point I wanted to make is that your name frequently comes up early in these conversations, and the talk becomes animated.

Sometimes particular books, plays, stories and even individual poems are spoken about. Victory, A House for Mr Biswas, Anthony and Cleopatra, Macbeth, A Taste of Watermelon, Ulysses. Surprisingly frequent mention is made of the way you pronounced certain words and insisted they ought to be pronounced. Every boy you taught knows the correct way to say jaguar and falcon. I’ve never heard mention of your treatment of grammar or the technical aspects of the subject, which is to your credit.

Sometimes particular anecdotes about things you did or said are recounted. I recall fondly an incident during an English exam in 1989. At that time M-Net was still a fairly new phenomenon, and few households subscribed to it. You came into our exam room to clarify an exam question that had caused some confusion. You gave an economical and perfectly clear explanation of what was required. Gareth Katz, repeating fifth form, decided to check whether he had understood you properly by offering his own clumsy version of what the question sought. Although it took a little while to comprehend, his version was patently very close to what you had just explained. Katz ended with a whine: “So then is that what we do Sir?” You looked at him seriously, with pathos, and without a trace of irritation said, “No Katzy, then you go home and watch M-Net.” It’s the only time I’ve been in an exam room that erupted with laughter.

** We loved it when you told us things that were a little edgy. You told us with characteristic verve about a performance of Macbeth you once saw in London. I can’t recall whom you said played Lady Macbeth, but you described how, when she delivered the “unsex me here” line, she wrenched her blouse aside and revealed one of her breasts. It was, you said, “beautiful although small, firm, her nipple pert … it was magic stuff chaps”. We thought so too. You also once encouraged us to forget about conventional corporate careers if we really entertained ambitions of making money and enjoying life. You offered a compelling alternative recommendation. We should gain rights to a piece of land on the Wild Coast, create a nudist colony, no fancy amenities required, target German and Swedish tourists, and ensure they were amply supplied with marijuana.

** When we reminisce about our classroom experiences with you, the talk is not always of specific memories, but rather of the effect you had on us. That’s certainly what is foremost in my mind when I think about you. I often think of you when I read and am concentrating hard to make sense of my response to what I’m reading. You are right at my source of that discipline. You may not have given us our earliest training, but you were there at the time we took our biggest strides into adult life, the time that is seriously formative.

I loved English more than anything and probably more than most, but I’m certain many others looked forward to your classes in much the same way I did. Perhaps it’s comparable to the way musicians in an orchestra must look forward to rehearsals with a great conductor. You may not like the analogy, because you seem to dislike the thought that you might be at the centre of things. But that does not change the fact. The way we were able to interact and combine with each other as classmates was because the person at the centre was you. You enthralled us with the force of your personality, sense of humour, the intensity with which you sense and make sense of the world, your knowledge of human nature, life and literature, and the way you brought literature to life and life to literature.

You did something more important than urge us to think for ourselves; you made it possible for us to discover what that meant. And that happened because of the way you responded to the feelings and ideas we expressed when we engaged with texts. You took us seriously, but always ensured we stayed within easy reach of humour. You exhorted us to keep scratching, searching, digging, trying to get the core of it, and then to work at articulating it. You helped us discover expression and communication. You gave us English. It came alive, and that helped us to feel we were coming alive too. Only an exhilarating and liberating teacher and person can do that. And that is you Slash.