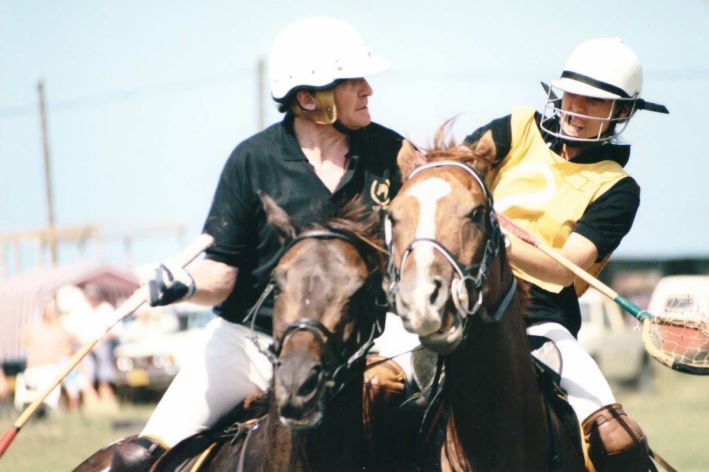 I like to think of myself as a typical Old Collegian who has enjoyed all 75 years of a normal life and I happily acknowledge that I owe a big “thank you” to College for the solid grounding I received!

I grew up on a farm in the Karkloof district outside Howick and attended boarding school at Clifton Prep in Nottingham Road up to St 3, Merchiston Prep to St 5 and Maritzburg College to Matric in 1963. I was a member of the Karkloof Pony Club from 1953 to 1963 and was an inter-branch team member in 1962 and 1963. Our team won the Prince Phillip Games both years! I also played polo for two seasons over in Otto’s Bluff, and used to ride for two days over the mountains to compete in show jumping and eventing at horse shows in Pietermaritzburg.

My funniest recollection of school was taking a snake to the boarding establishment after a holiday break. I got into trouble when I hung it in the branches of a bare “tree” on stage in the school hall during a dress rehearsal of a school play! Oh, and getting 6 of the best on the last day of school. Most of the matric boarders bunked out on the last night and we all got caught!

After a year in the Army Gymnasium in 1964 and two years at University (studying life!), I started working in Durban for Amalgamated Packaging Industries (later called NAMPAK) in 1967, becoming an industrial flexible packaging representative.

During that time I helped start the Durban Pony Club in the old New Market Racing Stables down near the Blue Lagoon. I was on the committee from 1968 to 1975 and did a lot of part-time instructing, including training a team which won the Prince Phillip Games at the Natal Pony Club Inter-Regional Games. We started the Branch with three horses, and when I left there were 120!

In 1975 the company moved me to East London. During this time I met and married Ann in 1978. We lived on a small holding with 3 horses, 3 St Bernard dogs, cats and a bird aviary! We were lucky to be in a position to travel and in 1980 spent three months going right around the globe – some 20 countries or so – it was a special experience! England, Europe, Japan, Hong Kong, Hawaii, North and South America! Our total budget, including all flights, was just R15 000 – how times have changed!  At home, I become very involved with the local riding club committee and started playing polocrosse as well. Also became a show jumping judge and started doing a lot of announcing at horse shows.

At the end of 1983 Ann and I divorced, managing to remain friends to this day. I had reached a point of stagnation at work (after 17 years!), so decided it was a good time for a major change! I moved back to Natal with no idea of what I was going to do!

In Natal I started working for Wakefields, the estate agents. First worked in Kloof and then we started the Hillcrest branch. Wrote (and passed!) the Estate Agents exam, but 1984 saw a slump in the housing market and I was due to starve! Sold a few houses, but was not going to stay alive! Just then an old friend from NAMPAK in Durban contacted me and offered me a job back in the same building where I first started working – now called Metal Box Flexible. Worked there for a year and then they were going to amalgamate with Rotoflex and we could see that some of us would be extra!

Just then an old customer of mine in East London phoned and asked me to come and work for him back in East London! Good timing! In Natal I had continued with a bit of judging and playing polocrosse.

Back in East London (1985) I worked for Courlanders Agencies (manufacture’s agents) as an industrial rep, with NAMPAK products as some of my main lines! This lasted for 15 years – that was until I got tired of broken promises and started doing Karmichael Education full time – more on that shortly! My younger brother David (OC class of 1966) died of cancer in 1987 (so only 38 years old!).

He was teaching at Linpark High in PMB at the time.

I met Shirley in 1990. We married five months later! Shirley grew up in EL and became a teacher and then specialized in remedial teaching. In 1997 she left government teaching and started private remedial work from home and has now been doing that for almost 25 years!

From 2000 to 2007 I was a member of the national management committee, the South African National Equestrian Federation– also made an Honorary Life Member. In between I started up a branch of the Pony Club here in East London and was District Commissioner of that for four years and helped to establish two other branches. I also became involved with the annual East London Agricultural Show and joined the committee in 2004 and became an executive committee member in 2008. At about the same time I became Vice-Chairman of the Gonubie Farmers Hall and also Vice-Chairman of the Gonubie Recreational Centre (made up of the Hall and a number of sports clubs).

Back in 1995 Shirley and I bought a franchise called Karmichael Education. We had in mind for Shirley to use it to help her when she left government teaching – as it turned out she has never had the time. (Almost from day one she has had a waiting list!). When they did the teacher training for the new Karmichael franchise members in East London I was on leave and joined in. At the end of the week I was elected Area Co-ordinator!

From that small beginning, I just got more and more involved. When I decided to leave Courlander’s in 2001, it was to do Karmichael full time. We taught study skills to pupils from grade 4 right up to university level. In the beginning I just used to do some marketing, but then started lecturing to university students and teaching down to grade 6 level. We found and trained suitable teachers to help run courses. Our groups were small, 6 to 10 depending on the grade. At university level we lectured to groups of up to 80 students! In 2004 my partner and I were awarded Master Franchisees of the Eastern Cape! In 2013 I gave up being active in Karmichael Education – after more than 17 years! (5 years part time followed by 12 years full time).

In October 2010 I signed an agreement to be the East London sales agent for Pickfords Removals. I wanted something to keep me active once I retired! This is low key and only requires about 10 hours per week. (10 years long service award last year at 74!) This, and a lot of reading, keeps me going!

September 2011 brought a big change when I decided to retire from show jumping judging (30 years) and announcing (about 40 years)! It was time for a break from horses! I also resigned from all other committees in 2012. I had about 45 years of committees and looked forward to a complete break!

During May 2013 I attended our Matric 50th reunion at College (and the College 150th!) and I hope to be able to make the 60th in 2023! My only regret is that being so far from PMB or a branch I was never able to be more involved with the MCOBA.