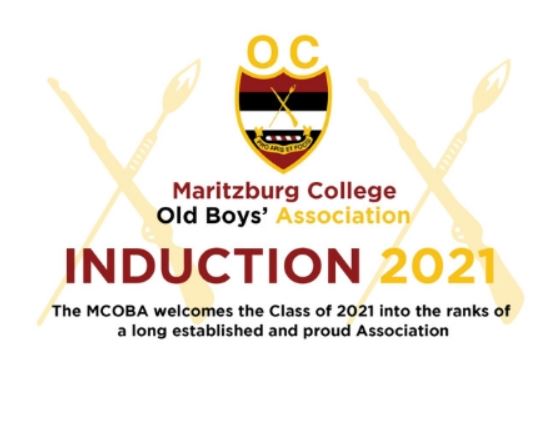 On the balmy eve of the 14th of October 2021, the Maritzburg College Old Boys’ Association held the annual induction ceremony during which outgoing 6th form boys are welcomed into the MCOBA and receive their Old Boy tie.  It is an auspicious occasion and truly a rite of passage.

The event was well attended by boys (96% of the year group) and parents, as well as a strong contingent of Honorary Life Members, Past Presidents, MCOBA Exec as well as the Patron, Chris Luman. Our Master of Ceremonies, the eloquent Matthew Marwick (Class of 1988), kept the formalities running smoothly throughout. After a few heartfelt words from Andrew Clayton (Class of 1991), President of the MCOBA and the emotional lighting of the candle in remembrance of the lives lost this year, the boys were ready to come up to the stage and fetch their ties. Some of the ties were handed out by President and others by a close OC relative of the inductee, but every tie was sponsored and so not a single boy paid for an Old Boy tie. The name and year of the OC who sponsored the tie is printed on the back. The boys are encouraged to get in touch with the OC to say thanks and to forge a connection – it is a start to building relationships with men who share the great common experience of attending Maritzburg College.  This was an incredible effort from the MCOBA and its members and contributed greatly to how meaningful the night was for the guests. After emotive words from 2017 head prefect Ross Williamson and Valedictorian Callum Lee, the procession was led by the piper as always to the Wall of Remembrance for one final shout. After lots of tears, pictures, and very big burgers, the night was over and the next generation of MCOBA members inducted.

Induction is an important right of passage and makes it clear to the outgoing matrics that they are not leaving Maritzburg College but merely moving on to a different phase in their College experience. It emphasises that older OC’s are always available to provide guidance and support and that their five years spent at College, are indeed for life.

Watch the shout by clicking HERE

Any boys who were not able to attend may collect their tie and pledge certificate from the Old Boys’ Office.